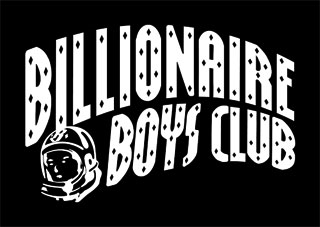 In 2003, singer Pharrell Williams partnered with fashion designer and A Bathing Ape creator, Nigo, in Japan, where they teamed up with Japanese graphic designer, Sk8thing, to create Billionaire Boys Club. NIGO is an iconic designer most well known for founding Japanese labels, A Bathing Ape and Human Made. Pharrell Williams has solidified his space in the music industry and is known for being an American rapper, songwriter, music producer and fashion designer. The two iconic legends joined forces to create a new and unique spin on classic streetwear styles. Billionaire Boys Club designs men’s and kid’s apparel including graphic t-shirts, hoodies and sweats. Often shortened to “BBC,” the brand is known for its loud, vibrant colors, bold graphics and all-over prints. The collections often utilize space and intergalactic inspired designs coinciding with their iconic astronaut logo. The motto behind the brand is, “wealth is of the heart and mind, not the pocket" and can be seen in a handle of collections that offer a similar, lighthearted message.  The line made its official debut in Pharrell William’s iconic music video, “Frontin.” Since the beginning, the brand has played a big role in hip hop and pop culture and has maintained its relevance as a staple luxury sportswear/streetwear brand to this day. Billionaire Boys Club has branched off into different sub-brands including ICE CREAM which carries a similar aesthetic.

Billionaire Boys Club B21146 ALL OVER PRINT CAMO T-shirt

On this site you can ship only within europe.

On this site you can ship only within europe.